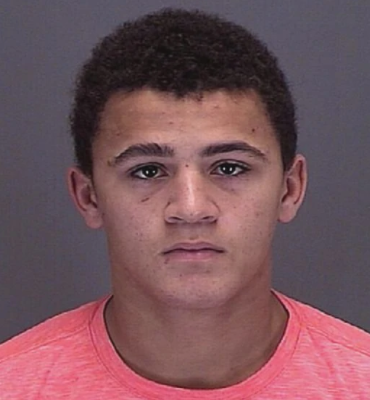 Police say Wyatt Eugene Tungland, 21, was pulled over for driving erratically just after 4 a.m. on Aug 30 at East Cheery and N 4th St.  It was about an hour and a half after a report of a fight in downtown Mankato. According to a criminal complaint, witnesses told police that a man named Wyatt had assaulted and kicked one of the victims during the fight.

Police say Tungland had facial injuries when he was pulled over later in the morning.  A criminal complaint says Tungland was driving in the middle of the road without headlights, and struck a curb as he was driving.  Tungland ran from the car into a wooded area, but was eventually taken into custody, according to the complaint.

Police say Tungland complained of a broken ankle and was transported to receive medical treatment.  A preliminary breath test put his blood-alcohol content at .19, according to the complaint.

Tungland was charged in Blue Earth County Court with gross misdemeanor DWI, and misdemeanor counts of underage drinking and driving, under age 21 liquor possession and consumption for the driving incident.

Tungland’s 21st birthday was the next day, August 31, 2020, according to the birthday provided on his complaint.

Investigators were able to obtain surveillance video that captured the assault prior to Tungland’s DWI arrest, according to the complaint.

Police say Tungland is seen in the video leaving a bar and approaching two men.  The complaint says Tungland punched one of the men in the head, then pushed him to the ground and kicked him.  He is also accused of kneeing the man in the head and face twice.  Tungland also pushed or hit the second man, who fell to the ground, according to court documents.

The fight ended when the second man hit Tungland in the head with a chair, according to the complaint.  Tungland kneed the first victim in the face again before walking away from the scene, according to police.

For the alleged assault, Tungland was charged with four gross misdemeanor counts of fifth-degree assault.

Tungland was convicted for his part in the beating of his high school football teammate in 2017, a case that attracted statewide attention.

He has multiple cases pending in the Minnesota courts, including an assault case from Sept 2019, and a sexual assault accusation in Martin County.

Tungland is due to appear in Blue Earth Country District Court in front of Judge Krista Jass for his latest round of charges on December 10.