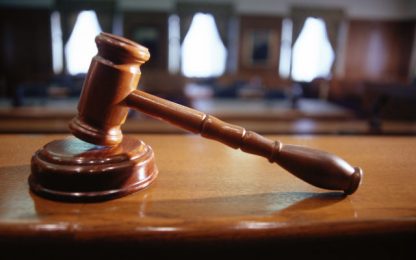 A Janesville man is accused of setting fire to a Frankenstein statue, destroying it.

Luke Duane Olson, 35, was charged in Waseca County Court with felony counts of 2nd-degree arson and 1st-degree damage to property.

On June 12, Janesville police responded to a fire at 2 a.m. near the intersection of Mill and Main streets, where the Frankenstein statue was fully engulfed in flames.  The statue was a total loss.

Surveillance video from the Janesville Car Wash provided police with evidence of a crime. According to a criminal complaint, the footage showed a man with a blanket over his head carrying a gas can.  The man attempted to light a fire, and walked out of camera view, says the complaint.  The suspect then returned to the area of the statue with a blue tarp over his head and started a fire at the base of the statue, according to the complaint.

Olson, who lives in the area, was identified as the man in the surveillance video.  Police say they found a wallet containing Olson’s driver’s license in a nearby salvage area, and a blue tarp matching the one seen on the video was found in Olson’s yard.

Police went to Olson’s home and arrested him on suspicion of arson.  The complaint says Olson insisted on speaking to his children despite the officer’s commands not to go inside.  Police followed Olson into the home, where they noticed two pairs of white shoes that appeared to match the shoes worn by the suspect in the surveillance video.

Later that day, a search of Olson’s garage netted a an olive-colored blanket consistent with the one seen in the video, and several red gas containers, according to the complaint.  Police say Olson’s shoes smelled of gasoline and a pair of his shorts were located in a covered garbage can.

The owner of the statue said the damages were estimated at $14,000.

21 hours ago
Connect With Us Listen To Us On