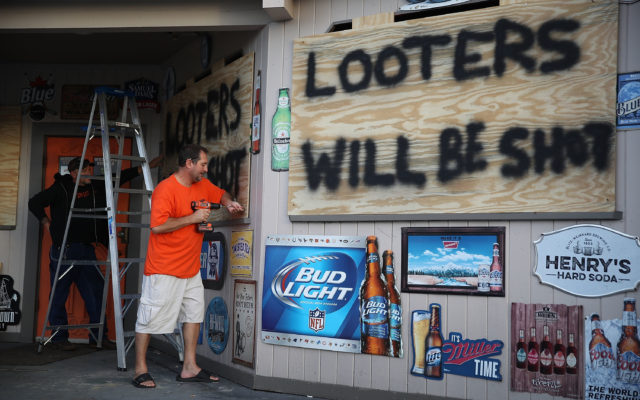 MYRTLE BEACH, SC - SEPTEMBER 12: Doug Lewis (L) and Chris Williams use plywood with the words 'Looters will be shot' to cover the windows of Knuckleheads bar as they try to protect the business ahead of the arrival of Hurricane Florence on September 12, 2018 in Myrtle Beach, United States. Hurricane Florence is expected on Friday possibly as a category 4 storm along the Virginia, North Carolina and South Carolina coastline. (Photo by Joe Raedle/Getty Images)

A Nicollet man was charged in connection with the looting of the Mankato T-Mobile store, which followed local protests over the death of George Floyd.

According to a criminal complaint, Conerly admitted to throwing a rock at the window of the T-Mobile store on May 30 after a Mankato Public Safety detective identified him through surveillance footage.

Conerly was one of eight or nine suspects seen on video damaging the property and going inside the business to steal items, according to the complaint.

Conerly admitted to police he’d thrown a rock at the store window, but said it didn’t break the glass.  He said he was caught up in the excitement, but once the window broke, he left the scene.

Police say nearly $3,000 in property damage was done, and almost $500 worth of items were taken from the store.