St. Clair crash victim recognized as police gear up for “Click It or Ticket”

(Mankato, MN) – “Honestly, I’m more sad that I lost the pickup than anything.”

Those were the words from Levi Tonn as he began speaking with media at a press conference with the South Central Minnesota Toward Zero Deaths partners as they prepare to kick off the 2019 Click It or Ticket campaign.

Tonn, who is now 18, was seriously injured in a 4-vehicle crash on Highway 60 south of Madison Lake last June after a distracted driver rear-ended the 1993 Chevy Pickup he was driving, sending the truck into the path of an oncoming dump truck.

Tonn may miss the pickup, but for his parents and for first responders, the relief that he was wearing his seat belt was palpable.  “Due to him wearing a seat belt, he’s with us today, because you can see the damage that happened to his pickup truck was quite extensive,” said Trooper Ken Dellwo.  “Without him wearing a belt, I have little doubt that he would have died in that crash.”

Tonn was recognized with a “Saved by the Belt” award given by the partners as they announced a surprise campaign Friday at McDonalds.  “This is for your actions,” said Dellwo as he presented the award. “I glad I could present this to you today instead of having to have to respond to a fatal crash last year.”

State Troopers and other partners will be surprising drivers at four McDonald’s restaurants in Mankato and St. Peter by giving $1 to the first 500 belted people they encounter until 1:30 p.m. Friday.

The Minnesota State Patrol says 76 unbelted people lost their lives on Minnesota Roads in 2018.  Greater Minnesota has seen 76% of those deaths caused by a lack of seat belt use in the last five years. 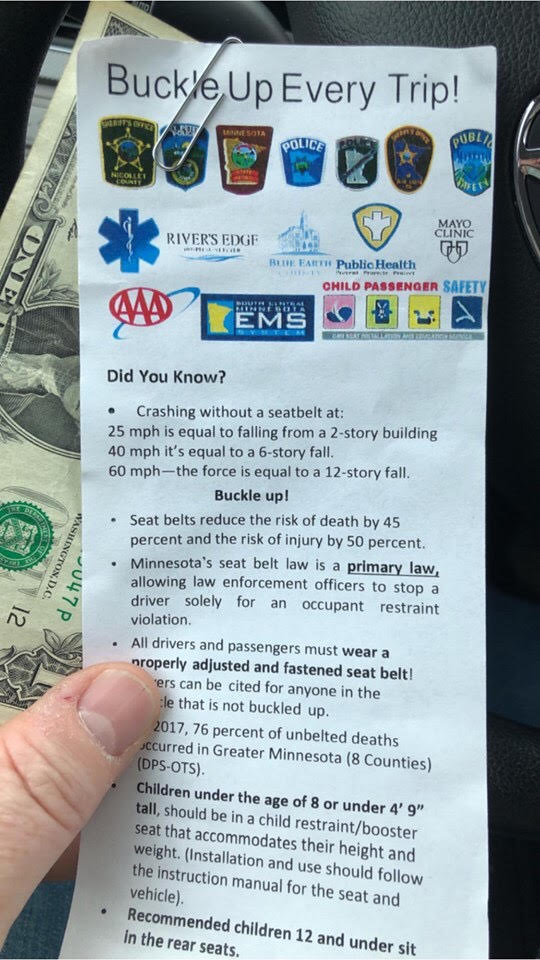 Click It or Ticket begins on Monday, May 20th and will run through June 2nd.  Troopers and local departments will dedicate extra resources to ensure motorists are properly buckled.