The Trump Unity Bridge made a stop at the fair in Albert Lea en route to Sturgis.

Rob Cortis, the Michigan man who built the Unity Bridge, said the idea came to him during the 2016 elections when Pope Francis said that world leaders should be building bridges, not walls.

Cortis and his son began traveling around Michigan, Ohio, and Indiana in August 2016 after completing the Unity Bridge.  The pair visited college football games, and events for both Trump and Clinton to spread the message.

“Our mission is to educate and encourage all Americans to share positive messages like the ones on the Trump Unity Bridge,” said Cortis.

His trip to Minnesota and the Freeborn County Fair was mostly positive, but Cortis said he did have one angry encounter with a mother and daughter duo.

“They were saying ‘eff you’ and using profanity,” said Cortis.  “We were giving out free Trump 2020 stickers if anybody would like one,” Cortis recalled.  “The boy came over and said ‘thank you, man,’ and he shook my hand, high five.  And that lady said to that boy ‘I hope you get shot in a school shooting for wearing that hat,’” Cortis said.

He said onlookers took the woman’s photo and recorded the incident. 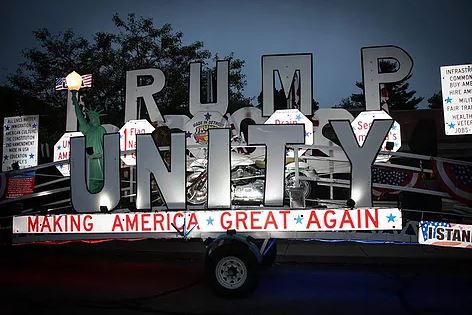 Otherwise, Cortis said they enjoyed their time in Albert Lea, stopping at the fair for “home cooking.”  He said the rest of the community treated him with “traditional American pride.”

There’s a good chance southern Minnesota could catch another glimpse of the Trump Unity Bridge in the foreseeable future.

Cortis has no plans to end their ‘Build the Wall’ tour after Sturgis.  The father and son plan to travel all around the country over the coming months.  More about their mission is posted on their website.