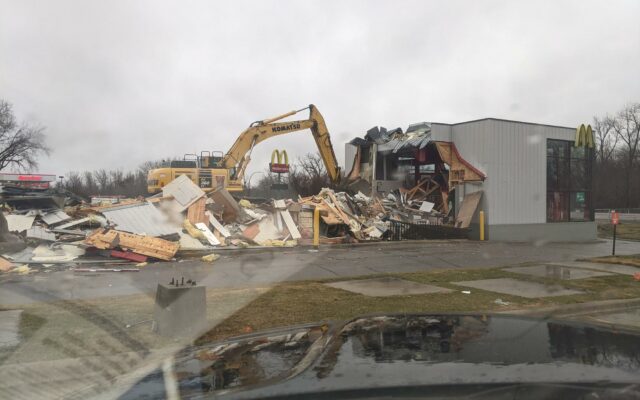 McDonald’s and its famous PlayPlace are missing from the St. Peter landscape, but a more modern restaurant will emerge in just months.

For decades a beacon of food and fun for families traveling Highway 169, the old building was razed last week.  The McDonald’s has stood at its location off the highway since 1980, says Jeremy Pollack, who purchased the franchise with his mother, Margaret Fitzpatrick, in 2006.

In its place will be a brand new, upgraded building, with improved drive-thru facilities, and a sleek new interior.  In fact, it will be one of the first McDonald’s in the country to sport a new decor theme.

Work is scheduled to be completed in July, and Pollack is hoping that they can celebrate the brand new restaurant with a grand opening, something that will depend on coronavirus restrictions.

“We would love for the customers to be able to come inside once we are done,” said Pollack.  “We redid New Ulm’s lobby last year in February.  I think we got two weeks out of it before we had to shut our doors.”

Between traffic off the highway, and local support, Pollack said the restaurant does well, business-wise.  But the single-lane drive-thru and lot set up were restrictive, he says.

The new building will be situated so that parking is on the left side, and the drive-thru lane will run parallel with Highway 169.

The interior will be a style that no one has really seen at a McDonald’s yet, says Pollack, who described it as a “nostalgiac road trip” vibe.  “There are mirrors on the wall that look like hubcaps,” he said, “but it’s ultra-modernized, as well.”

The store will have self-ordering kiosks, and customers can order from their smartphones and have their meal delivered to a booth instead of waiting in line.  That is, as long as coronavirus restrictions don’t prevent this option at the grand opening.

One big question remains.  Will there still be a PlayPlace? Pollack says yes, although it will look a bit different.  The old facility was quite large and required vigorous maintenance, said Pollack.  The new location will still be a decent size and will feature different toy styles, but it will be an upgrade, he said.

There are about 65 employees from the St. Peter McDonald’s that are being bussed to train and help at other McDonald’s locations during construction.  When the doors open on the new restaurant, another 40 to 50 people could be hired, said Pollack.

Pollack and Fitzpatrick also own the New Ulm, Owatonna, and Waseca locations.

5 hours ago
Connect With Us Listen To Us On